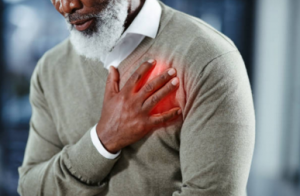 The esophagus is a tube that connects the mouth to the stomach. It is made of muscles that work to push food toward the stomach in rhythmic waves. Once in the stomach, food is prevented from re-fluxing (moving back into the esophagus), by a special area of circular muscle located at the junction of the esophagus and stomach, called the lower esophageal sphincter (LES). A pressure difference across the diaphragm, the flat muscle that separates the chest from the abdomen, also tends to keep stomach contents in the stomach.
The stomach combines food, acids, and enzymes together to begin digestion. There are special protective cells that line the stomach to prevent the acid from causing inflammation. The esophagus does not have this same protection, and if stomach acid and digestive juices re-flux back into the esophagus, they can cause inflammation and damage to its unprotected lining.

HEARTBURN SYMPTOMS
Gastroesophageal re-flux disease (GERD), is a condition in which heartburn is a symptom. Stomach acid re-fluxes up into esophagus and causes pain. This pain can be felt as a burning sensation behind the sternum or breastbone, either as a spasm or a sharp pain. Many times the pain of acid re-flux can be mistaken for the pain of a heart attack.
The pain of acid re-flux (heartburn) can remain in the lower chest or it can radiate to the back of the throat and be associated with water-brash, a sour taste in the back of the throat. If there is acid re-flux near the larynx (voice-box) in the throat, it may cause coughing episodes or hoarseness. Re-flux over prolonged periods of time can be severe enough that acid wears away the enamel on teeth and causes decay.
Symptoms are often worsened after heavy meals, leaning forward, or lying flat. Those affected may often awaken from sleep with heartburn.

Complications
Heartburn is not without complications. If ignored, recurrent irritation and inflammation of the esophagus can lead to ulcers, which are small areas of tissue breakdown. These can cause serious bleeding.
As well, scarring and stricture are other significant complications of GERD. Changes in the type of cells lining the esophagus may result from acid re-flux, causing a condition known as Barrett’s esophagus, which is associated with an increased risk of esophageal cancer.

HEARTBURN DIAGNOSIS
Heartburn is a common complaint, though it can be confused with other chest-related illnesses, including:
• heart attack,
• pulmonary em-bolus,
• pneumonia, and
• chest wall pain.
The diagnosis begins with a complete history and physical examination. In many cases that provides enough information for the health care professional to make the diagnosis and begin a treatment plan. In some instances, further testing may be required:
X-ray: The patient may be asked to swallow barium or Gastrografin (two types of contrast materials) while a radiologist, using an X-ray or fluoroscopic machine, watches the contrast material travel down the esophagus and enter into the stomach. Aside from looking for irregularities or inflammation within the esophagus and of the esophageal walls, this test can determine if the esophagus muscles are working properly in a rhythmic fashion to push the contrast material into the stomach.
Endoscopy: In this test a gastroenterologist uses a flexible scope and with a fiber-optic camera to look at the lining of the esophagus and stomach. Inflammation and ulcers can be identified. Biopsies and small bits of tissue can be obtained to look for cancerous or pre-cancerous cells.
Manometry and pH testing: Less commonly, when conventional therapy has failed to confirm the diagnosis, or when symptoms are atypical, use of pressure monitors and acid measurements from within the esophagus may be helpful in making the diagnosis.
HEARTBURN TREATMENT
Lifestyle changes
• Eat smaller, more frequent meals
• Avoid eating before bedtime
• Avoid alcohol, aspirin, ibuprofen, and caffeine
• Stop smoking
• Elevate the head of the bed (or use two or three pillows) to allow gravity to keep acid in the stomach and avoid acid re-flux.